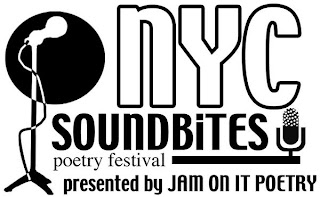 In April 2009 SoundBites Poetry Festival will return with writing and performing workshops (sponsored by Poets and Writers), an Off Broadway Showcase and a $1000 Team Slam.

Early registration is now open.This slam will only host 12 teams. The top two teams from the two bouts will go head to head to find out who gets the $ and the title. This is the time to finally work with your friends and your favorite poets!

CHECK OUT: in SUPPORT OF MICHELLE OBAMA www.secondladies.com 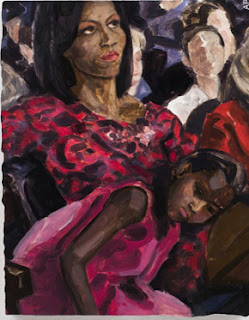 Welcome to the Second Ladies website! I have written this introductory note to tell you a little bit about who I am and how Second Ladies came to be. Renaissance, the name by which the Secret Service refers to Michelle Obama strikes me as a good place to start.
When the Secret Service revealed a few weeks ago that Michelle Obama's code name would be Renaissance, I thought, "That's interesting." Interesting that the Secret Service just told us what her code name is. Is that safe? Interesting that this particular moniker had been chosen for this phenomenal woman. How fitting for Michelle. Our First Lady is the ultimate multi-tasker, who manages to imbue each role that she undertakes with extraordinary dignity. But before I digress into a panegyric on the subject of Michelle Obama, I must go back to the beginning. And while I do not intend to tackle the whole Adam's Rib question in this missive, I must acknowledge that with respect to Michelle Obama and my awareness of her, Barack Obama came first.
Like so many Americans, I have been deeply moved by the candidacy and election of Barack Obama. As a mom with a few fancy degrees on my resume, I found myself at a crossroads on the night of November 4th when Barack Obama called all of us to service. I'd just returned to Brooklyn that morning from a weekend trip to Virginia, where I'd knocked on doors for the Obama/Biden campaign for several days with my husband, our two-year-old son and our four-year-old daughter. Indeed, I was so busy calling my father, a field organizer in Virginia, to celebrate Obama's win in the Old Dominion that I practically missed the announcement on the news when they called the overall election for Obama. What a night! My phone rang incessantly with calls from elated friends and family, all wanting to share the moment as my husband and I celebrated in our apartment's living room. The euphoria that night was extraordinary.

The party in our house was in full swing, and it was only 11:00... I could still hang out like a woman without a care in the world for another whole hour without being too tired in the morning to run the 7:00 AM drill of getting my kids dressed and ready for the morning's activities. Then, the president-elect began to speak. Barack Obama obviously did not realize how much fun I was having, because he got right down to brass tacks. His remarks that night were brilliant, but he wasn't exactly raising the roof. He was coming out of the gate with a new tone, a sober one. He signaled that he was going to be a healer, a uniter and a pragmatist. He reminded us that although we'd won an opportunity to realize the true greatness of our country, it was not going to come easy. We were going to have to get out there and keep on earning the right to more nights like this. We'd rolled up our sleeves to help Obama win, and he made it clear that night in Grant Park that our work was just beginning. His remarks sent me into a bit of a tailspin, and it wasn't just because he'd killed my buzz.

I'd recently resigned as general manager of a record label founded by John Legend. I'd spent the past few months savoring the extra free time with my children as I began to think about my new career path. I had my checklists organized. I'd brainstormed the pros and cons of various career opportunities. I'd even joined ladders.com, and now here in the middle of my methodical career search, Barack Obama was telling me to jump in the fray and make a difference. DO SOMETHING!! So, I did. Or at least, I tried. I went on a quest to find volunteer opportunities in my area that would be a match for my skills. It was harder than I thought to figure out which organizations were legit. It was harder still to find ways to volunteer in a hands-on way. I found that a lot of organizations preferred for me to make a financial contribution. I understood where they were coming from. The mission of these organizations was not to facilitate my desire to volunteer. Nonetheless, I was frustrated. I wondered how many other people with meaningful skills and good intentions had been discouraged after a few unsuccessful attempts to get involved. I began to mull this over in my head and thought about creating an organization to facilitate a volunteer matching service, but then I thought, "Why would anyone care? I'm no one." So, I moved the concept to the back burner and focused on a few short term consulting projects.

One night a few weeks later, I was singing my kids to sleep. "When the Saints go marching in, oh when the Saints go marching in." As my kids dozed off, I lay there and continued singing for a few more minutes to make sure they were sound asleep. I reflected on an email I'd received earlier in the day from a friend about some of the alleged threats against the president-elect. My friend was very upset in her email. She wanted to know what we could do to make sure that the Obama family was always safe. I lay there with my arms around my kids and thought about the vulnerability of the Obama family--not their physical vulnerability, but their exposure to all manner of painful and disruptive criticisms and attacks. I thought about the inevitable chaos of the public life that Michelle Obama would have to navigate for herself and her girls on the world stage. In that moment, I wanted to wrap my arms around this woman I'd never met to let her know that I was wishing her well. Then, I remembered my idea, my volunteer matching idea. I decided to bring the two impulses together. "Oh Lord, I want to be in that number, when the Saints go marching in." And it was then that Second Ladies was born.

I have summoned everything that I am and everything that I know how to do to build this community. I am calling on all of my friends across a wide range of backgrounds to help me in creating a safe haven for the incredible woman who will support our president. I am urging every American who has been inspired by the Obamas' call to service to get involved, not with Second Ladies necessarily, but in your community. Second Ladies is a conduit. This site is meant to be a gathering place, the Grand Central Station of the volunteer movement inspired by Michelle Obama. Like any transportation hub, we'll have lots of fun chatter and information, but we are also here to help you get someplace. We want to get you out into the world where you can make a difference. In answer to the Obamas' clarion call, I am asking you to join me in this movement. Become one of the First Lady's Foot Soldiers. Put your boots (or stilettos) on the ground for a good cause. Michelle Obama has identified a number of causes that are close to her heart, but she has also indicated that the most important thing that any of us can do is to get out there and DO SOMETHING. HELP SOMEBODY. So whatever the causes may be that inspire you to action, I encourage you to join this community in order to find like-minded individuals motivated to serve with you.

It is my hope that Second Ladies will help us to help others, but even more than that, I envision a community that will empower us to help ourselves. By coming together in the course of our busy lives to exchange opinions, we will create a support network for each other. We will liberate ourselves from the isolation of our busy modern lives, and hopefully we will give each other ideas about how we can manage all the balls that we have in the air. Whether you are in your twenties or your sixties, married or single, working at a job or working in your home, a parent or an adult without kids, I am certain that you have a lot on your plate. By following Michelle Obama's example and by supporting her and offering her advice in her complex role as First Lady and Mom-In-Chief, we too can learn to multi-task with greater personal fulfillment, to become more balanced. As we help Michelle Obama succeed in realizing her vision as First Lady, she will help us to do the same in our own lives. Michelle Obama's code name is particularly apt, because with her example and her charge, she has ushered in a renaissance for all of us. Second Ladies is my humble attempt to capture this lightning in a jar, to turn it into a movement that will carry on even when the posters and the buttons (and my "Obama Mama" t-shirts) are put away, and to give it a name.

I hope you will join us,
Drew Dixon Williams Founder, Second Ladies
Posted by Mahogany L. Browne at 2:20 PM 2 comments: 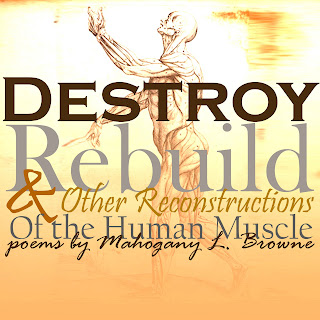 We are pleased to announce that the Winter issue of Up the Staircase is now officially live!
We hope that everyone enjoys the new issue along with a few changes that we have made. This issue contains a note from the editors, as well as a special feature from co-editor Stephanie Anderson called "On Winter." Our "Up the Staircase In..." article features the southern town of Clarksville, TN this quarter. We hope everyone stops by Carolyn Ferrell's section to hear about her novel on Clarksville.
Our Literary Reviews page and our Back Issues page have been changed to include all past contributors! We hope you check out these rejuvenated sections.
As usual we have some seriously high quality writing in our poetry and fiction sections:
FEATURED WRITER: Nanette Rayman Rivera

Also, check out our new contest winner!
Thank you to everyone, we hope you enjoy!
your editors,
April Michelle Bratten
and Stephanie Anderson.
www.upthestaircase.org
Posted by Mahogany L. Browne at 3:43 AM 1 comment: 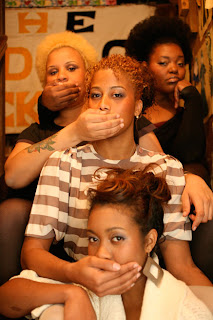 ONE NIGHT ONLY:
Bitten Tongue is comprised of Aja-Monet, Eboni, Falu & Mahogany L. Browne. This firestorm is a testament to the fearlessness of mothers; the beauty of sisters and the spellbinding wonder of poets with a mean stare and a hate of fashion faux pas. They have united to fight against people that wear they're sweaters tucked into their pants and wack pick up lines.Bring your girlfriends, your neices, your daughters and your mothers foran evening of pretty drinks and pretty shoes.Please join NYC's first ladies of poetry in their first theatrical production.
Posted by Mahogany L. Browne at 9:21 AM 4 comments: