i have been all wierd cause of these drugs they gave me
but life goes on -- i got meetings, and lunch dates (w/amari)
i got a movie date(which im sure i will fall asleep in) and uniform
shopping to do.

my throat is swollen on the inside - and my eyes want to stay
closed -- but i have this world take-ova, operation oprah,
so there will be none of that.

i got a spider bite
on my ass
next time i tell someone off
while im angry - i will
remember this
crap
Posted by Mahogany L. Browne at 11:39 AM 4 comments:

working on several projects at once is serious business.

i find myself structuring my day in shifts:

this shyt is hard. makes me feel like an adult. i mean excluding the cereal break. cause you know a sista needs dat damn cap 'n crunch...

but this is what they say the hustle is about. so i don't worry about going to the cafe in the rain. i try to focus on the book case overflowing. know that my next book will be alongside them in barnes n noble. borders. tower. all dat!

but then i snap out of it. i gotta go back to work.

sixth hour: school shopping for the kid, more myspace and a siesta

and once i wake. back to the grindstone of converting PDF for printers, editing poems, and trying to breath thru the process.

i am venting. but this is the good kind. the kind that pushes you forward. outlines your breath and reminds you of the folks that try to hinder that growth. that light that shines when you really about gettin' shyt done.
Posted by Mahogany L. Browne at 11:06 AM 1 comment:

him singing "kool-aid" as some form of jedi mind trick

me laughing until my chest hurts...
Posted by Mahogany L. Browne at 12:22 PM 1 comment:

revisit tools for relationship and self

communication lines open - even when it hurts

also,
write projects that occupy your space and mind -- mine was almost two pages long... which is beautiful and scary.

he says im too busy, i agree. but i feel like a slouch if all and every moment isnt accounted for...
Posted by Mahogany L. Browne at 12:32 PM 1 comment:

it took 4 days of family

i performed at soul cypher, which was dope considering NER city and Scorpio produce the show. and they brought something beautiful back to Oakland which makes me happy to come home for more than peach cobbler!

my grandmother's birthday dinner was beautiful. we went to scoma's which is a big time seafood restuarant on the bay of san francisco's waters. the food was massive and gorgeous and expensive. that's all im saying.

amari is so tall. i almost fell over when she ran for me and jumped in my arms. she's a trip. but now, we have to ween some of that oakland slang outta her. and the eye rolling - gotsta go!

now im in san diego, my flight leaves in 4 hours and im going back to the mall. i have to cop these sneakers and work off the payment - cause i was supposed to be working for rent and car tow money - not shoe money. but if you know me, you know i cant pass up a fly pair of nikes, adidas or pumas. so - whatever.

oh yea, my sis got engaged. im happy for her. beyond all the personal information that i wont share here - as long as he makes her happy, he can live. that said - imma be a bridesmaid. yea. can you say diet? again! anyway. im going back to watch project runway. i have so much to tell you - but this isnt the right time.

trust that i will as soon as it is all clear. just know this, i've decided - i'm going to be the Oprah of this poetry shyt...
Posted by Mahogany L. Browne at 1:54 PM 6 comments:

i have a class
and got jaha's new book
to be published by PENMANSHIP (yes, me)
real soon :)

there are those silver linings i was looking for
Posted by Mahogany L. Browne at 11:24 AM 1 comment:

are coming - the car, was the beginning.
i have to check myself slowly -
"look both ways before crossing my mind"
no one really wants change, the unknown
is scary
but i do
and im an advocate for GET OVER IT ALREADY!
we ain't time to stress those things we can't
change -- but i recognize it's fuk'dup-ed-ness

i mean really, i aint a machine

bklyn O in the bldg
Posted by Mahogany L. Browne at 8:06 AM 1 comment:

today my car was towed... i can feel the beginning of something bad happening.
Posted by Mahogany L. Browne at 11:18 AM 3 comments:

ok. this will come in sets of 3. this first one is about the nuyo and the assholes. the next ones will be about louderarts, austin neo soul and life after... enjoy!

it was one of those moments that i will never forget. as first year coach for the Nuyorican, i was extremely proud of my rookies: darian, falu, rainmaker and shanelle. not only did they throw their testicles against the wall -- they socialized with the teams. built relationships with other poets and listened intently.

i tried to ignore the dismissiveness of certain hosts and just kept a neutral and polite (yea, me) stance -- even taking it so far to pour them a cup of my gratitude for opportunity, for a beautiful setting, for the fukn' sun coming down and beaming against my forehead. basically, i made sure there was no animosity on my part -- even if they didnt have the decency to look me in my face when speaking. asshole.

now, im home. and it all rushed me. but before i knock at any of the things that i felt was a huge FUCK UP (like not inviting the co-champion of 2005, Janean Livingston, to perform at indies finals or team finals or womens showcase or even a friggin workshop!) -- let me say this. i had a blast. and i think Mike Henry should look into running for fukn president!

he was welcoming to EVERYONE, he was on point and he made me want to come back year after year (even if that stupid rule of regionals' winner only being guranteed a position in later NPS. he is th shyt. fa real.

now, back to the back to the nuyo... we had a lot of drama. so many people came up and asked me "is it true?" so let me give you this. the persons that were once on the team were all phenomenal, in their own creative way. but dedication to a UNIT rather than one self can be trying and beyond what one is trying to do for their career. that said,

1. yes. we did have 3 team changes. for reasons like punctuality (but not limited to). and yes. it can be considered extreme -- but i know when someone is saying "i'm late because i almost got in a car accident, and the iron burned my kitchen into charred tar" or "i'm late because i can be, bitch. get off me". since it was the latter, i was willing to take only 4 people if that meant they would be dedicated to the team and not some personal doctirine. hell, i was willing to take 1 poet with a a suitcase of disguises and 20 poems!

2. yes, the nuyo only takes a poet ONCE! no really. lol -- and while its admirable, let me give you this. with the climate of poetry and most of the new poets that have emerged, post def poetry, the selection is getting harder and harder :( -- the poems are getting worse and worse and i am wincing my way thru slams. but right when i've given up - darian dachaun, falu', and shanelle gabriel walk in the spot. these are the team members brought in after cuts. they ALL placed highly (if not winning) semi's and runoff slams. they weren't just some poets i found on the streets. (though i did meet falu in bklyn before begging her to come slam at the nuyo and see how she liked it), they were all a part of the mix. and deserved to be a part of THAT TEAM, because they were willing to leave the ego's at the door, they were willing to sacrifice time and work, they were willing to undergo child care issues, double work load for time off and no sleep -- for an NPS opportunity, they deserved it. and for the cats that made them believe for one second as team members their positon was a tainted one - kick rocks! they stepped up like soldiers and walked in the trenches, under scrutiny and past the "masked marauder bullshit" for that NPS moment and they shined every minute.

so this is my thank you to them. ya'll rocked out the nationals. and i am glad you could see the goodness beyond my abrasive truth, while it may be considered "hardcore" and overwhelming -- it was always for that insurmountable moment - when we made semi- finals (besides all the naysayers wishing us an early demise) when we made indie finals, as we ate and drove and laughed and recited each others poems... that is all i have ever wanted for you. the goodness that goes missing when slam become too serious. the relationships that go unnutured when slams become to serious. and the people and poets and thinkers and genuises we lose touch with - because of points, rather than the people that inspire more better POEMS... and to brady. the only one there when i was about to burst. the one that talked me outta pop'n the car trunk and keep'n it OAKLAND. the run that ran the poems, ran statistics, kept it clear - stayed honest and NEVER NEUTRAL... thank you chica, i owe you a veggie burrito...

all of you, thank you for giving me the opportunity to be a part of such a beautiful ensemble.
Posted by Mahogany L. Browne at 10:19 AM 4 comments:

settling...of the storm (not a poem)

which in this case, is your life
and you wonder what comes next
and why are you so bent on using a certain type of pen
when so many are available to you?
or, why are you writing without a pen - what does that
mean? that experience you are trying to write without
the tools needed?
or maybe you have run out of pens to use and are just
waiting for someone with a stack of pens to borrow.

ok - this is where the metaphor drops --

and in doing so - sucked my writer's spirit away

that's how i feel about drama.
i think i have allowed a healthy amount
to fester and really eat at my core - but there
are pieces of soulful flesh caught in my
nightmares and pushing my limbs to action.

i can't watch someone i love and respect
(whose pen has scribbled and cursived an
awakening in me) be in pain. especially
if i can help... and therein lies the problem.

i am no martyr.
i admit some of my actions are abrasive,
still, it is who i have grown to except
as me

and from here, it doesn't look so bad
Posted by Mahogany L. Browne at 10:00 AM 3 comments:

pics of MoBrowne in MoBay 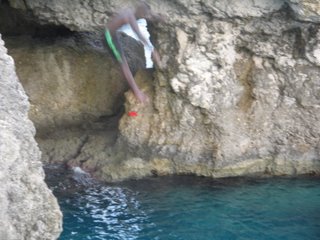 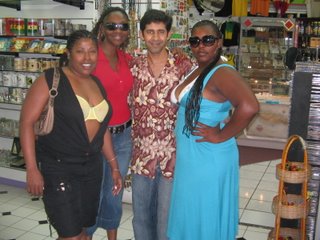 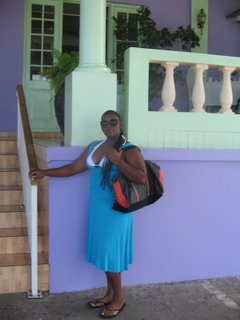 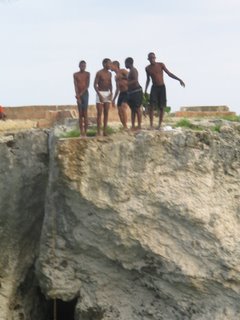 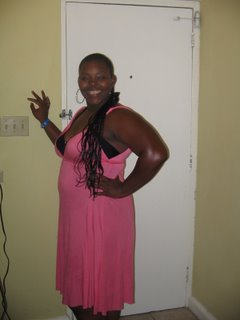 i have been to paradise ya'll..