and somehow, i tricked myself into making it a 3 plus hour journey. not for the sake of keeping my thoughts. but because when it comes to directions i am ridiculously dumb. i can't navigate my way out of a turnip jar. but whatever.

the night and the morning attached to its side like a bad cousin was inexplicable. but it left me in the guest bedroom of a friend/promoter's house wondering about my past misdeeds. the ones i committed while still in oakland. fresh of heartbreak and off the committed bandwagon. i counted while lying in bed, the men that i allowed no real parts of me, and wondered how one gets to that point. i remembered then that it was easy to think of it as nothing. flirting to fling. who cares, im single. and no feelings would be hurt. even if they were mine up at stake.

i didnt like myself very much. but you couldnt tell it by looking at me. i looked as if i loved life. and everybody swarmed around me for the warmth of it. i took to keep company with men i would never have looked twice at (before or after) and i treated some "ok" brothers as i know they would treat "ok" sisters. i was that woman that men talk about when they got they heart broken. though i cant say that i broke anyone's heart, while im sure i tried, subconciously.

still. not the most admirable of persons. and i think of those moments now. before i fall asleep and find my self surrounding by shadows of who i used to be.
Posted by Mahogany L. Browne at 9:26 AM 1 comment:

the trollup (is that how you spell it) is checkin' for your date, your significant other, ya know -- that ONE. they sidle up in front of you, ignore you, smile brightly into the eyes of your lover and push past you to hug tightly the frame that makes you shake, willingly.

a) wait for them to peel their bodies apart before your loved one, introduces you.

b) grab said desperate one by the hair, extremity, throat and toss them to the furthest corner.

c) look amused. wait for loved one to introduce. when it doesn't come. walk away steaming. they wont be getting any of that wonderful tongue tonite.

one has to breath in their opportunities
i say

today was interesting
started off ok - then shaky
then ok again - then shaky
stay shaky - then real cool
to mellow - to coffee induced, shake

but never bad. or even close to it
just a lil' awkward

the way one rolls over and finds a lovers arm, nooked and ready for resting, or dreams. i like the ease of a lover's want. unlike the eyes that wander. signaling more want and desire to regions unknown to self. but then there are those moments.

where you laugh with friends over spanish food. where you ride the train talking loudly and laughing louder. where you sing in the car of each other's praises - and still i think of him. though i love these moments. and treasure them dearly. i relish in the nook of my lover's embrace,

and see smiles in his shadows wake.
Posted by Mahogany L. Browne at 1:55 AM 2 comments:

the air smells like dog poo but the chipotle was slamming

im in minneapolis. right before our 1 year anniversary.

and its hectic in life right now. jared paul had to cancel last minute, and our opening musical act, Brent Shuttleworth, had a family emergency that landed him in FLA.

besides that, my daughter cried because i was leaving for the evening (i will return to host/produce JAM) and im broken.

i want to be able to give her everything and everyone who ever made a promise to fufill that. but it aint working out that way. it seems our words ain't what they used to be. they dont mean shyt anymore. "balls and my word" seems like saying "i love you" to a one-night stand. maybe it feels like love while you are in their face -- but, you both know the truth.

and the truth is im tired. sometimes i want to crawl up and sleep until everyone goes away. life seems too hard for no reason. i aligh myself with people and do right by them -- expecting the same in return. but this is a futile attempt at humanity for most. most get in where they fit in so they can get what they came for and get out.

and maybe i want that non-nagging sensation that comes with doing for SELF. i dont know. i am blundered on so many levels and it just seems to keep getting deeper. that feeling of regret. and resentment.

how does one stay afloat in such murky waters?
Posted by Mahogany L. Browne at 4:49 PM 1 comment:

the things that happen

confusion. sets in.
and now i dont know what to think
where to turn
how to feel

call me soccer MOM, what?! 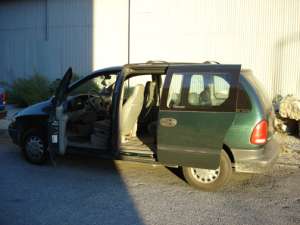 this is the nu baby... and im still gangsta!

thanks for hanging in with me -- those who listened to my whining, you will not be forgotten :)
Posted by Mahogany L. Browne at 10:39 PM 4 comments:

"if i could pull away your sexy
i might"

wow. i have had crazy writers block when it comes to finishing a poem. and this is the first one done since who knows when.

what a relieve. while everyone is out having fun, clubbing, sleeping and sexing. i am writing with glee.
Posted by Mahogany L. Browne at 2:12 AM 2 comments:

"unzip my body and take my heart out"
Posted by Mahogany L. Browne at 11:04 PM No comments:

work in progress... a love supreme

lose sight of everyday dreams
and lets work on this here
blueprint
Posted by Mahogany L. Browne at 10:38 AM 1 comment:

getting ready for the block party
trying to write a poem
actually, 3 poems. all commissioned.

not bad to feel this worked, i guess

i just don't know it all the time

big want: a new car. a minivan preferrably. yea. that'd be sweet.
Posted by Mahogany L. Browne at 9:48 AM No comments:

because nothing is ever random, is it?

ive been happy. and happy to be busy. and pained in walking but happy to ride the subway and read and smell odious scents of new york city residents. some smell nice. either way, it reminds me im alive. and well. and i miss watching the maxx video set that he bought. one of them went missing. im afraid i cant bother my self, or my sinuses to go thru the tapes to find it, just yet. bassey and i work diligently in the coffeeshop. before i head home and wake him from his slumber. he sleeps like i dream. often and deeply. and i think of things like this while slaughtering pastrami panini's in bedstuy's lush and newly named stuyvesant heights (for 1200 rent hike) but yea. whatever.

i miss my texas friends. but courtesy of myspace, the devil, i ran into a high school friend. she was glorious then and even more so, now. we caught up for atleast twenty minutes on my cell as i trekked the cities 12 blocks to nearest train stop that would lead me to my next meeting (3 meetings, 2 classes in one day :( ) but it was great to hear her voice. and her smile. she was always a star caught in the matrix. we fell in love with UH HUH, a neo soul singing group named terri and monica, before there was such a title (check it, 1996). and we sang like we might get signed. like we weren't falling in love with boys that would fall out of love with us when time permitted change. we were young. it was heartbreaking.

i hope amari has life like that. not filled with all this hypersexual bull that they pass off to kids in between disney channel and nickeldeon. i hope she has a chance to be the star she wants to be. she asks me often if she is famous. as she believes my travels and non stop ringing of the cell phone make it so. i tell her she will be bigger than i ever could think of. even if she still tears when asking if i heard from her father. i tell her no. because i haven't. i tell her he loves her, even if he doesn't know how to show it. she looks at me as if this is what i am obliged to say, and she ain't buying it. i never look at her long. i wouldnt want her to see the truth pouring head first fufilling her wondering eyes.

sperm donors. that's what chandell said. and she was so right. so many men can bear children but not raise them, and they lose no value in themselves. whereas most women, and i know there are exceptions, will lose respect *which has already dwindled to physical measurements and weave length* if they arent in their child's life. but that's another rant of randomness that isn't really random... now is it
Posted by Mahogany L. Browne at 10:18 AM 1 comment:

we deserve to be happy...
Posted by Mahogany L. Browne at 8:41 PM No comments:

the wire in bklyn

funny thing happened this afternoon.
i went to get some work done at the local coffeeshop and who do i run into?

MARLO from the wire.

im sure he knew i knew who he was...
the way i sucked my breath in - i mean,
he's a convincing gangsta on HBO's the wire
so yea, i was a lil stunned...

but then i remembered, this is new york city.

i should be used to these things, right?
Posted by Mahogany L. Browne at 12:38 PM 2 comments: